The Emohua Field was formerly operated by Shell Petroleum Development Company of Nigeria Limited (“SPDC”). It was awarded to Erebiina by the Federal Government of Nigeria in 2021 as part of the Marginal Field Program. 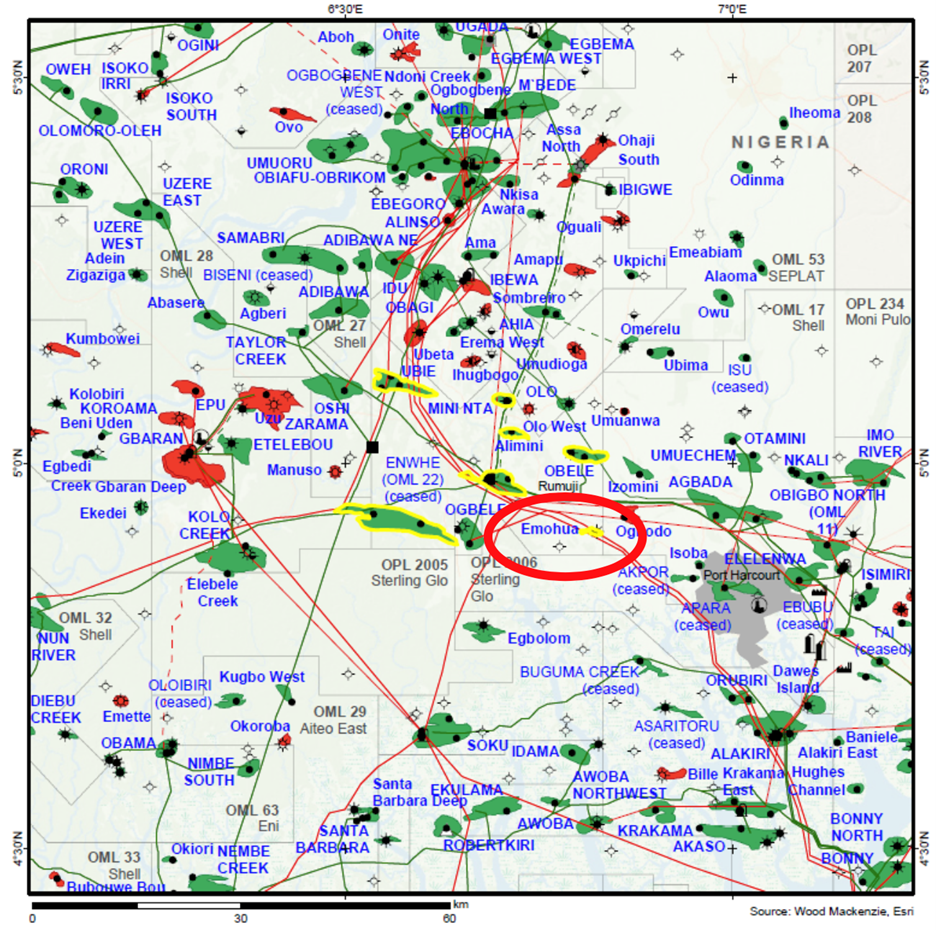 One well (Emohua-1) was drilled by Shell Production Development Company (“SPDC”) in 1979 to a depth of 11,050 ft and encountered oil and gas in several stacked reservoirs. The well was suspended by SPDC as an oil and gas discovery. Data available includes 3-D seismic acquired in 2000/2001 and wireline log data. Petrophysical analysis showed the presence of nine hydrocarbon bearing zones ranging from 20 ft to 70 ft thick. Seismic interpretation also shows upside potential in the deeper undrilled/untested zones where potential closures exist.

The next planned stages for development of the Emohua Field include re-entering the existing Emohua-1 well, drilling and completion of up to nine additional wells, installation of production and export facilities, and construction of flowlines. The Emohua Field can potentially be placed on production in an expedited manner immediately after the re-entry of the Emohua-1 well due to existing oil and gas export pipelines being located within 5 km of the well.

The full field development plan will include the expansion of the processing facilities to enable handling and processing of up to 30,000 barrels of crude per day for the expected peak production levels.

Summary of Letter of Intent between Westfield and Decklar

Decklar and Westfield have signed a non-binding letter of intent with respect to the proposed acquisition by Decklar (the “Transaction”) of all of the issued and outstanding ordinary shares of Westfield (the “Westfield Shares”). Westfield has separately entered into an RFTSA with Erebiina in respect of the 60% equity interest that was awarded to Erebiina for the Emohua Field. Further, Decklar is aware that Westfield is seeking to enter separate RFTSAs with one or more parties in relation to the remaining 40% interest in the Emohua Field.

The Transaction terms include a cash payment of US$7 million, which has already been paid as a deposit to be credited against the final purchase price, and the issuance of up to 6,000,000 common shares of Decklar (“Decklar Shares”) as consideration for the acquisition of all the issued and outstanding Westfield Shares. In the event Westfield enters into additional RFTSAs in respect of the remaining 40% interest, up to an additional 2,500,000 Decklar Shares will be issued to the shareholders of Westfield. The specific terms of the Transaction remain under negotiation, and the Transaction will be structured, and definitive agreements entered into following the review and consideration of applicable tax, securities, corporate law, and other relevant considerations and shall be subject to the mutual agreement of Decklar and Westfield, acting reasonably. The Letter of Intent shall terminate with Decklar and Westfield having no further obligations to each other under the agreement upon mutual written agreement to terminate or by either party if definitive agreements have not been entered into by November 30, 2021. The Transaction will be subject to customary conditions precedents to completion, including, if applicable, approval of the TSX Venture Exchange.